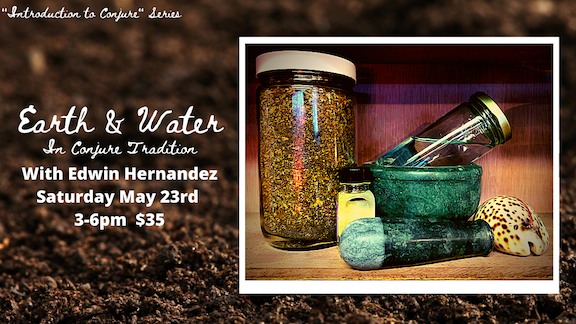 Class 4 in the “Introduction to Conjure Series”

In conjure we work with the elements but mainly Earth and water. This class will focus on the power these elements house and how to empower them to aide in works that match their location. Where to get dirt to enhance prosperity? Ever use the dirt from someone’s foot track? Dirt holds power from the energy that inhabits different places. Learn the uses of different dirts and how to properly collect them. Much like earth, water is another powerful tool in conjure. The waters from the sea, a creek, rain etc. hold its own ashe; because of that we understand that not all waters are used the same, and we will look at making floor washes and baths to add another layer to your spiritual work.

Edwin Hernandez learned and lived the art of Conjure from birth by working with Animal and Root Spirits, and the presence of Ancestors with his grandmother in Puerto Rico .As he grew in curiosity, he began to use the knowledge gained and expanding on it, learning spiritual philosophies from Buddhism, Hinduism, Satanism, and Khematic magic.

While learning a reverence for these spiritualities his main practice has always been comprised of Hoodoo, Conjure, Ophidian magic, and most recently Vodou.

Tarot and Divination play a key role in this relationship.

Though learning from a young age, he now counts at least 20 years in serious pursuit of this path, and began his relationship with the Lwa about 4 years ago. He works closely with snakes both physical and spiritual. His students and clients call him Papa Crossroads due to his work mostly happening in the crossroads both physically and spiritually.